This is about the new Canon 70-300mm\ 4-5.6 IS II Nano USM lens, Canon finally updated their consumer grade version of the 70-300mm. I did owned the previous version (70-300mm IS USM), it was a good lens for the price but the IS was loud and clunky, this new version will certainly be better in that department. As soon as it was available I pre-ordered one, I currently own the 70-200mm/4 L (non-IS) which is a very good lens but i’m often in needs for more reach and i’m missing the IS. Also I have a big gap between my 70-200mm and my 400mm/5.6 L.

My expectations for this newer version of this lens are: better AF, better IS and better IQ than the older version.

Canon still doesn’t supply lens hood with their consumer lenses compared to Pentax and Fuji (2 brands that I’ve owned or still use, which supplies hood with virtually all their lenses). Unfortunately the hood of my 70-200mm/4 L (non-IS) doesn’t fit even if the filter size of both lenses is the same 😦  So I had to buy the Canon ET-74B for 73$ (Canadian), this hood have a release button on it, so the hood is really solidly locked to the lens, good design but is missing a window to turn polarizer filters.

The minimum focusing distance is closer than the previous version (1.2 meter versus 1.5 meter) but the magnification ratio is the same 0.25 x which means that the version II is framing wider than the MK I version.

The LCD display on the lens is something new in lenses, ZEISS have it and now Canon. Is it a gadget, will it endure years of field abuse ….. only time will tell but the LCD on my 7D is still working and if the quality of the LCD on the 70-300mm is equal it should last the life of the lens ! Personally I don’t see any use for it on such a lens …… maybe on a Wide angle zoom lens the DOF marks for the f-stop would be useful but not on a telephoto zoom lens, and focal lengths are not useful to me since they are already marked on the lens barrel, but I find it more useful in the EXIF data anyway. As for the IS info it’s completely useless in my opinion !

Build quality is very good, certainly a good step above the MK I version. The lens feels solid in the hands and the zooming ring is well dampened but the focusing ring is more like most AF lenses a little loose but I’ve seen worst than this one.

The lens have a button to lock the zoom ring at 70mm for transport, it would have been great if it could be locked at different focal lengths …… maybe too much to ask 🙂

I really like the new Nano USM AF system, very silent and fast, certainly better than the one on my 70-200mm/4 L non-IS ! Works quite well up to now. The Nano AF system will be very useful for video shooting.

All the photos posted here were taken with my old 7D in RAW. In short the IQ is quite good at every focal length, it’s not as good as an L series lens but better than a consumer grade lens….. a good compromise in term of price versus IQ and size.

Here is a crop of the photo taken above with no PP and no sharpening. 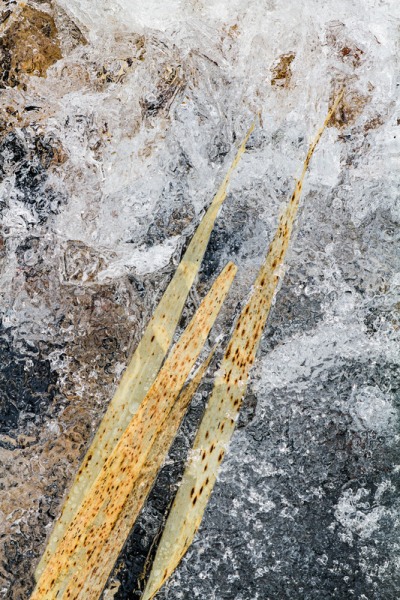 One of the reason i bought this lens was because of it’s close focusing ability. Here is a “close-up” of ice taken at 213mm at f/10 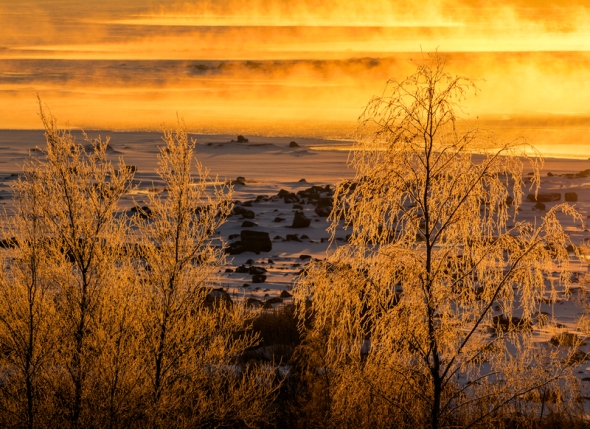 Same location and morning as the above shot but with the sun directly in the frame, still no flare. Taken at 81mm at f/10.

Up to now i have to say that i’m really satisfied with the flare resistance of that lens, certainly better than my 70-200mm/4 L (non-IS). As you can see in the photos above even with the sun directly in the frame the lens didn’t show any flare.

You can see from the crops above that there is not much difference in details resolution, the 70-200mm/4 L (non-IS) is a little sharper but not by much. The 70-300mm produce more CA in the OOF areas and at the same setting it’s wider than the 70-200mm and the 70-200mm produce a smoother “Bokeh”. I will not post many crop because it’s always nearly the same difference in framing and sharpness between the two lenses.

This is my impression after about 1 month of field use, i will post updates as i gain more field experience with that lens but it’s already proved to be a very useful and versatile lens.

It’s a very good lens that delivers very good results in the field, good contrast, Bokeh is not too bad and sharpness is certainly very good. This lens is doing good to very good in most department but it’s not an “L” lens, if you want the best IQ possible in all department then buy the 70-300mm L IS lens, but if you don’t want or need the “L” version this 70-300mm IS MK II is worth considering. I already like it and can’t wait to use it for photographing my Frog friends next summer !