It’s Ice fishing season here in Canada, not the greatest winter but we finally got enough ice thickness so that peoples can now put there ice fishing cabin out on the ice. I was too early (around sunrise), so nobody was fishing yet. I posted the B&W conversion because I felt it was better looking than the color version.

Always carry a camera with you !

I try to carry a camera with me as often as possible, you never know when a good opportunity will happen in front of you. This was shot tonight, I just ordered a Pizza at a local restaurant and I had to wait 20 minutes for it to be ready, so I decided to see if I could find something to photograph along the old Canal that is not too far away. After walking along the edge of the ice I finally found those 2 leaves surrounded by ice bubbles. Keep a camera with you and open your eyes. 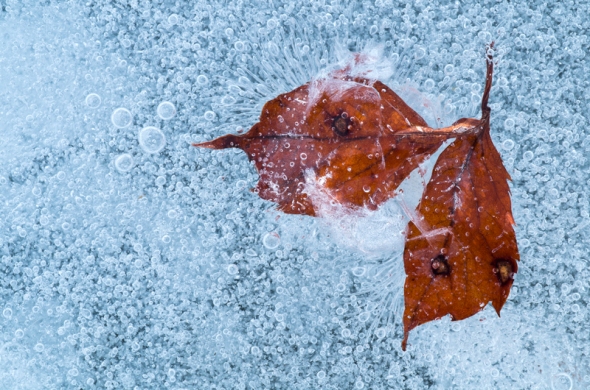 When I woke-up on Monday morning it was -20°C, finally a cold night ! I took the following photo from the bottom of the canal looking directly at the waterfall. The shot was taken with my Pentax K50 and DA 40mm XS at f/11.

Two days later after 2 nights of -20°C temperature and that morning the temperature was around -12°C, i went back, but this time I positioned my camera at the top of the canal and waterfall and looking down at it. This time I used my Canon 7D with my 24mm STM also set at f/11. You can see that there is a lot more ice on the canal !

This morning it was -4°C when I woke-up, I headed to a field near my home that I knew that will have a lot of frost. But the most interesting subject was Clover leaves caught in ice in a waterhole.

Taken with my Pentax K50 and Tamron 90mm Macro, tripod.

Didn’t had many occasion for photography this week but managed to get that one last Monday, it was -22°C before sunrise and -26°C with the windchill factor. I knew that along the Canal Soulange where there is those old wooden structures, the water froze on them and the surrounding vegetations.

Here it is, my first photo of 2015 taken on 02 January 2015 before going to work i stopped at the old Canal Soulanges in Pointe-des-Cascades. I like that place in winter, the scenic varies depending on the temperature, as it gets colder the ice get thicker. I liked the directional pattern the ice took this time, probably from the mist coming from the waterfall that is just outside the right side of the frame. As a final touch i placed the Maple leaf caught in the ice near a strong point of the rule of thirds.

This morning it was -15°C when i woke up, so i went on the shore of a river to photograph ice again before it melts in the coming days because it will be warmer and with rains on December 24th. As usual i got very close to the river, even fell on my butt in the cold water, by chance my winter pants are waterproof 🙂 I tried different angles and lenses, this is my favorite one and i converted it in B&W.

Not much time to shoot this week but got a photo on the shore of a Lake close to my work. Birds are staying later and later now, some even stay here that were flying South some years ago, warmer climate probably ?!?!

These are Great Blue Heron tracks in the snow and ice, i didn’t saw the bird unfortunately. I converted the photo in B&W and finally i like it better than the color version. Taken with my Fuji X-E1 and 18-55mm on a tripod.

This week i was looking for leaves “On” or “In” the ice. One morning i was about to quit my search because i couldn’t found what i was looking for. Then i saw an Oak tree leaf that was partly frozen in the ice, i liked the dark and white pattern of the ice surrounding it.

Yesterday, when i woke-up, it was -10°C and knew where i wanted to go to see if there was fresh ice along a river. As expected there was fresh ice on the rocks and moss in the river. I played with my camera in the water for 2 hours and got some nice photos, but this one is my favorite.

This week was not the most productive, i took some photos of ice and leaves but not what i was hoping for. I went to an Historical site near my home this morning, it was -5°C and very windy, windy days are difficult for photography unless you can take advantage of it. This site is on the shore of the St-Lawrence river, i was hoping to find some ice formations on the rocks in the rapids. There was some ice for sure but the best looking ice was farther from the shore in the river so i had to walk in the river to get there, i had to be careful not to slip on the icy rocks and on the mossy rocks that were in the water.

Since my tripod was set directly in the rapids and it was quite windy i pushed down on it during the exposure to prevent the vibrations from shaking my gear. Taken with my Fuji X-E1 and XF18-55mm at 55mm, ISO 250, 1/4 sec. at f/13, tripod.

Finally we had some colder days this week, i was waiting anxiously for below 0°C temperatures for more opportunities, especially frozen waterholes and ponds. I like photographing leaves caught in ice, it’s a subject that you can find easily. This week photo was taken at a pond, what attracted me was the contrast between the pale leaves and dark water and ice. The 2 water drops were frozen on the leaves which added some interest.

Last Monday the temperature during the night dropped to -2°C, before going to work i stopped at a river to see if ice had formed on the vegetation and rocks. There wasn’t much ice on the rocks, not cold enough but on one rock there was some moss covered with ice. I used my 180mm Macro lens to get that close-up of the small moss, i like the color combination of the green moss and blue/purple water in the background.

This morning i took my first photos of Frogs in 2014, but it was not what i was hoping for as my first shots ! This 2014 spring is cold like the winter we had and it looks like we will have 2 more weeks of cold days. This morning it was -1°C, again, and there was ice on the waterholes. What i found in a small waterhole (about 2×6 feet) beside the small pond (about 5×20 feet) both not very deep, is 5 dead frogs caught under the ice.

I found 5 Frogs dead in that small waterhole, maybe too small for them.

So it looks like these frogs choosed a too small waterhole for the long winter and just suffocated.

Here is an interesting article i found about the subject:

This week photo is a closer composition of ice and snow taken in a river, i crossed the river to get in place on a small “island” of rocks in the middle of the river. I converted it in B&W since there wasn’t much colors anyway.

This week i took mostly shots of leaves caught in ice on a Lake near my work, it’s not always easy to find the best subject, but you know when you find the right one !

It’s been a very cold week, nights temperatures were ranging from -20C to -28C ! Good for forming ice on rivers and Waterfalls. This is a shot of an old Canal close to my home, it’s been closed to navigation for many yeasr now.

This week was not very productive for photography, so i just got some shots this morning. I’m sharing a Macro shot of a leaf frozen in a water hole.

I’m just starting this new series, i will post my favorite photo that i took every week, a photo that i like or represent something for me. So lets get started, November is a transition month between Autumn and real winter and opportunities or not always evident depending on the years. This week i’m showing a photo i took before going to work, it represent what the November month is for me, cold and brown.

Frosted leaf on an icy pond.